When I started hiking it was around 43 degrees so I started off just in a sweater and was plenty warm. There was not any snow yet on the ground and the headlamp gave the leafless trees long skinny shadows. As the sun rose and the headlamp came off I got to a section of forest that was hit hard by the Chimney Top 2 wildfire. This was my first experience with such a wide stretch of badly burned forest that the reality of the fire truly set in. It was amazing how the fire would leave spots untouched but then would totally burn another section out. There were also places where the under brush and/or ground cover was burned but the trees seemed not to have been touched. The whole thing felt very eerie.

Trillium Gap at this point basically follows Roaring Fork Mortor Nature Trail up until the Grotto Falls parking lot area where it breaks away and starts to really head up LeConte. This part of the hike was my least favorite when it came to views though you did get a good glimpse of LeConte but you will only get it when there are not any leaves on the trees. It does, however, really give you a perspective of the distance that needs to be covered to get to the top. Once I got to the Grotto Falls parking area I was on familiar ground having hiked this section of the trail many times up to the falls and to Brushy Mountain. It is always a nice walk and this was the first time I have been on it in the winter.

By the time I got to Grotto Falls it was starting to get cooler and ice started to appear on the trial. I put on my microspikes when I got close to the falls and at this point they worked splendidly. There was a good volume of water running over the falls and it had started to form ice cycles underneath the rock outcropping. The sense of adventure always stirs when you walk behind the waterfall and in the winter with ice made it all the more invigorating at least for me. At this point of the hike I really felt like it is time to get down to business. During the busier touristy times of the year this is the spot on the trail everyone turns back but for me I feel like I am just getting started. I put on my stocking cap and made my way to the next landmark the Brushy Mountain / Trillium Gap junction.

This was the fourth time I have been at this junction but the first time I stayed on Trillium Gap. The other times I have gone the other direction a short hike to Brushy Mountain that does have some fantastic views. I took a small water break and it was at this point the snow started to fall, light at first but then started to come down at a pretty good clip. I have said it before and I will say it again there is always a renewed sense of excitement when one takes their first steps on a new trail and it was with this feeling that I hiked on. My favorite environment in the Smoky Mountains is at the higher elevations where the pines and fur trees become prevalent. There is just something about that pine smell that appeals to me and when you add the snow on top of that I am truly in hiking heaven. This section of the trail got steeper and more icy so my pace got slower and slower. It was at this point I began to realize I may not have the time I need for everything I wanted to get in at the top of the mountain.

As I closed in on the top of Leconte my legs really started to feel sore and knew it was about time for a nice break and some lunch, but decided to press on because of the time. Close to the summit along the trail there was a wire railing pinned into the rock face where running water had frozen to form basically a wall of ice. Nature always amazes and I feel privileged to be able to see such things. Around 13:15 I finally had made it to the top. I took some pictures around the Lodge and then made my way to the shelter to have some lunch. By this time the temperature had really dropped and I got fairly cold since I was no longer moving. I changed out of my sweater, put on my winter coat had lunch but decided I did not have time to spend taking pictures as I had wanted to do. My orginal plan was to have lunch and then visit the summit, Myrtle Point, and Cliff Top but the ice had really slowed me down and now I had to head down in slick conditions. I knew this was going to take some time.

I made my decent via the Rainbow Falls Trail which was the way I hiked up my first time back in June of 2013. The trail was fairly icy in spots but I had my microspikes. This is where I realized they did not quite work how I intended as snow would get in between the chain links and then compact. This basically turned the bottom of my boots into ice themselves. I was constantly banging the snow out of them on the way down as I would start to slide in spots that did not even have ice. Eventually I got into a rhythm and knew roughly when it was time to clean them out. Next winter I might have do a little more research and come up with a better pair. They worked well on just plain ice but when you added snow to the mix they became a little problematic.

On my way down I ran into the worst burn section that I saw all day. It was a large swath of land and appeared to have been mainly mountain Laurel and unlike the other places everything seemed to have been burnt from the ground up. At about 16:30 I ran into two hikers going up without true winter jackets, trekking poles, or spikes. They stopped and asked me about how much further it was to the top and at that point it was probably around two and half to two miles yet to go just to get to the top. They did not have any overnight equipment and it would be another six miles to get back down once they did get to the top. It always amazes me how many people are not really prepared for the hike they are going on especially in the winter conditions. I told them about how much further it was and we both continued on our ways. Apparently they must of thought better of it and passed me coming back down about ten minutes later.

I reached Rainbow Falls just  after 17:00 and stopped to take a few pictures. It was a tad bit warmer at the lower elevation and the snow had become heavy and wet. Just as I took my last picture there was a drastic change in light when the sun had gone down behind the mountain. I had about two and half miles left until the parking lot and made my way down as fast as I could. I feel that I am in above average shape, but this hike really pushed my endurance level due to the snowy and icy conditions. There was less ice at the lower elevation and I was able to take the spikes off and make better time. With just under a mile left I had to get my headlamp out and started dealing with snow, fog, and now darkness. Staying on trail became somewhat of a challenge but I was able to manage. I made it back to my car around 18:30 and thus ended my Mt. LeConte winter adventure. Next time I want to try and spend the night at the top so I have time to hit all the views and summit. I really wish I would have gotten to take a picture at the summit as it would of the perfect addition to the perfect day. 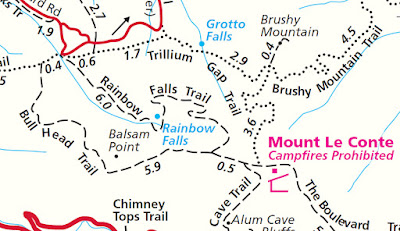