Well we had another food breakthrough with Liam getting him initiated to boyhood. Last night Mary Ellen and Liam were having hot dogs with Liam having his cut up on the plate and Mary Ellen eating hers in a bun. So Liam looks up and says “What is that?” Mary replied “a hot dog bun.” His next question was, “Well what is it for?” I told him it was like bread for a sandwich so you can eat the hot dog with your fingers, and he really seemed to like that idea. Then he wanted a bite of his mother’s hot dog with the bun and proclaimed "this is good." 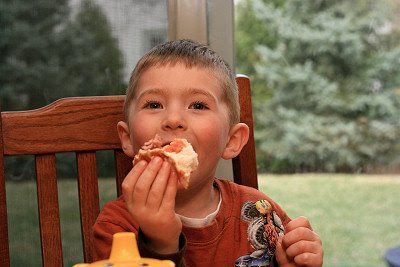 After a few more bites of his mother's hot dog he decided that he liked it so much that he wanted one of his own. This was of course as he was just about finished with the one he had on his plate, and Mary and I never thought he would finish it but we gave it to him anyway. Well, the boy inhaled the whole thing and told us that he never wanted a hot dog again unless it came with a bun. So now once we get rid of the warm milk when he first wakes up in the morning I think we can graduate him to full fledged boy.
Posted by Alex Hauck at 7:49 PM No comments: 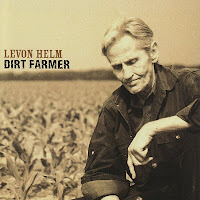 Continuing my journey through folk music I come to a man many of you probably heard in his earlier years with The Band, Levon Helm. The Band had such hits as “The Weight,” “The Night They Drove Dixie Down,” “Up On Cripple Creek,” and more. A think a lot of Southern Rock, which is what you would categories The Band as, has some roots in folk music just without all of the strings.

In 2007 Levon Helm released a new solo album called dirt farmer that has a very strong folk base to it. In an interview I saw on Amazon.Com I believe he talked a little bit about the album and how a lot of these songs were sung as a child on the farm. With great string guitar playing and Levon’s rough voice this album really seems to take you back in time. The melodies and blending of instruments with the back ground vocals gives one a sense of sitting out in a field late at night with your buddies drinking beer. I also love Levon’s story telling in his songs you really do feel like you know these people and are going through their trials and tribulations with them.

My favorite song on this album is called “Train Robbery” and I guess my drawl to it is again history. I love railroad songs and this is a railroad song about Jesse James’ gang robbing the train. Some other good tunes on this one are “Calvary,” “Anna Lee,” and “The Blind Child.”

In my next installment I will continue my tour of folk music with a modern, up and coming string band out of Tennessee.

Posted by Alex Hauck at 6:42 PM No comments: 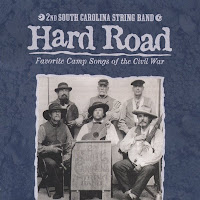