At this point I was losing daylight and was planning to have my dinner, beverage, and film a time lapse video over on Cliff Top. Cliff Top is another rock outcropping with a view of the Chimney Tops and is the spot for Sunsets. It is also close to the shelter, but I had to hoof it to get there with some daylight left. When I got there the view was good, but clouds were moving in, and the wind had picked up considerably. It was so windy I could not set the GoPro down on the tripod because the wind would just take it away. I tried holding it for a while but with the wind I could not even hold it steady. I figured I would never get water to boil for my meal, so I packed up and headed back to the shelter.

When I returned to the shelter it was dark and not a sole was there. I saw a total of four people hiking down as I was going up, but it is a long loop no matter which way you go, and it was a Friday so that made since. Most come up the Alum Cave Trail because it is the shortest and I did hear a large group roaming around when I first got up there. I figured at least there would have been a few at the shelter but I would occupy it all to myself.

I boiled water for my food and had my beverage but soon it was dark, and I could no longer see unless I had my headlamp on. It was only 8:30 PM but I decided to pack in and hit the sleeping bag since there really was nothing I could do. I slept really well and was never cold even though the wind blew something fierce, and the rain started coming down around 3:00 AM. My Sleep system worked great and the three-season sleeping pad has been one of my best backcountry camping purchases I have made.

I was awake around 5:00 AM still not being able to see anything, so I dosed on and off until about 7:30 AM then made some coffee. I made two cups and sampled a Black Riffle Coffee pouch and their instant coffee. Both were good though I think I might try two packages next time for the amount of water I used. I had my freeze-dried biscuits and gravy and tried to repack my gear to protect it from the rain the best I could.

Finally hitting the trail around 10:00 AM and as I headed towards Trillium Gap I decided to turn around and descend via Rainbow Falls. My plan was to get started earlier and by taking this route it cut about four miles off my trip. The rain came down and I would walk through mist from time to time. I was now making good time as my track took me downhill and I did not see anyone on this side of the waterfall.

When I got to Rainbow Falls I took my camera out to film as I approached but when rounding the last turn the falls were covered in a shroud of mist. Rainbow Falls is one of the most magnificent waterfalls in the park with it being one of my favorites to visit but it did not want its picture taken today.

The hike up to the falls is one of the parks most traveled trails so it was no surprise that I started running into quite a few people at this point coming up the trail. I felt a little sorry for them slugging through the rain and mud in nice clothes to get a picture at the waterfall only to not be able to see it when they get there. I also have come up with a hat idea, one that reads “Don’t ask me how much further!” as just about everyone heading up asked me.

After another two and half miles I reached the Jeep, put on my dry clothes, and headed home for a well-deserved beer. This was a beauty of a hike and one if you are fit enough I would diffidently go and try it. Here in the near future, I plan to try the Bull Head / Trillium Gap loop, but I might go fast and light instead of staying the night. Not sure yet, but you can be sure I will let you know how it goes when I get it in.

- Click Here For My AllTrails Recording -
The trail goes through several up and downs and you hit two summits above 6,000 ft. Before you even get to Mount Mitchell. Those are Big Tom at 6,580 ft. and then Mount Craig at 6,663 ft. There is a lot of rock scrambles at this point hard but extremely fun. You are also rewarded with sever nice views of the surrounding mountains.

After you hit Mount Craig you go downhill for a little bit and then you start heading up and good incline. They do have stone steps to help you up however you are on natures stair mill. You will start hitting picnic areas that will open up to a parking lot. The summit is crowed with a lot of tourists since you can pretty much drive to the top. There is a gift shop and restaurant (snack) place and then you have just under a half mile hike up the summit trail to get to the top.

Unfortunately, my wife’s luck rubbed off on me today and I was provided with a blanket of fog and not a real view from the top. I still enjoyed the whole experience and maybe I will get a better view after finally completing the Black Mountain Crest hike. After spending a little time on the summit I took the Old Mitchell trail that will be the final leg of my loop hike.

While not the Black Mountain Crest this trail is pretty difficult in its own right. It is steep, there are rock scrambles, and it is currently under construction that makes extremely slick in spots. The trail hugs the road down the mountain and you get a forest vibe. You will hit the parking lot to the main restaurant where the trails pick back up on the other side.

Extremely fun and challenging hike I would recommend this one. Also stay tuned for my second attempt at the Black Mountain Crest trail.

Hike up to Mount Cammerer

Heading west on the Appalachian Trail one continues to head up at a significant elevation gain. Trail crews at one time made steps out of dead trees but a lot of these have become washed out and have made the steps quite high in places. After about a mile you hit the junction with the Lower Mount Cammerer Trail that takes you to the backcountry campsite #35 and then on to the Cosby campground. Here I continued west and up where I heard something big moving about out of eyesight. I made some noise then I saw something brown moving in the bush. I couldn’t get a full look so it was either a bear or a turkey and with how heavy it sounded I would venture bear.

At about two thirds of the way to the Mount Cammerer Trail head you come to a rock outcropping with a fantastic view of the mountains. These views are hard to come by in the Smokies due to all the tree cover so I aways take some time to enjoy and take it all in. After this incredible view the trail becomes quite steep again finally evening out at the Mount Cammerer junction.

The Mount Cammerer trail is only about a half mile and leads you to the fire tower. It is a wonderful hike through mountain laurel tunnels and little rock scrambles which then drops you out in front of a small rock wall the fire tower sits on. The view from around the fire tower are amazing though the inside of the fire tower is a little less the desirable. With the structure sitting close to the Appalachian Trail you get a lot of hikers that use it as a shelter so there is a lot of rubbish lying about.

Hike up to Mount Crammerer Links

Smoky Mountains National Park December 2 - 3, 202 2 What a trip! Mount Le Conte is my mountain of choice in the Smoky Mountain Natio... 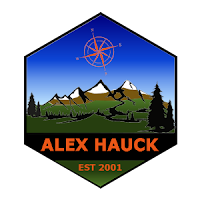