Where in my driveway is there a sign for Redneck Parking? Please if anyone has ever noticed a sign at anytime in my driveway that said redneck parking please let me know! 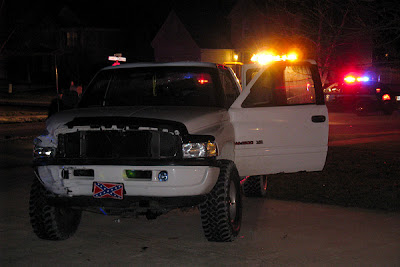 Around 10:00 PM last night I was getting ready to brush my teeth and get to bed at a reasonable hour when all of the sudden I heard this incredibly load bang. I turned down the television and looked out my window and saw what looked like to be a garbage truck or two in the park a few houses down. I thought that maybe they were empting a dumpster and it fell off the truck, so I go back to my business. A few seconds later Mary Ellen yelled up the stairs that there was a car crash just outside of our home.

So I put on my coat, boots and hat to go outside when Mary said I think you should stay in because someone is going crazy out there and a truck just drove into a yard/driveway. But I thought I should go out and make sure everyone was okay as Mary dialed 911. Apparently the neighbors’ daughter and boyfriend must have been backing out of their driveway and this guy in the white truck slammed into them. A confrontation then issued and then he drove the truck into its resting place in my yard/driveway and he took off on foot. When I got out there my neighbor was out looking for they driver of the white truck with baseball bat in hand.

After a few minutes the police start showing up and they get a K-9 unit in to track this guy down, who I believe lives at the front of our neighborhood. I don’t think anyone was hurt too bad, because the paramedics didn’t bring anyone out of the house, but I’m not too sure about that. The car on the driver’s side looked like mangled aluminum foil and there was glass all over the street, it is amazing that no one was seriously hurt. Finally the driver of the white truck was caught by the dogs and I watched at the police pulled out the guys hunting rifle and found his target in the back of the bed. The other thing that was a little unusual was all the ice scattered in my driveway which leads me to believe he must had been drinking and dumped it while he took off running. 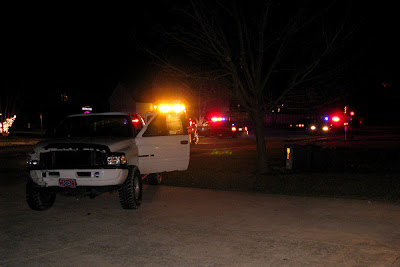 Luckily Mary was with me this time and reminded me to take some pictures for my blog, and by 11:45 PM the wreaker finally showed up to get the truck out of my yard/driveway. I thought we had moved away from the East Side but between this and our deer pornography I’m starting to wonder.

Mary Ellen spoke with our neighbor briefly last night and the driver of the car was pretty lucky, just 14 stitches. I guess what happen was the white truck was behind the car which was turning left into their driveway when the truck tried to go around them. The truck sped up and crashed right into the drivers’ side of the car and actually pushed it quite a way before stopping. The driver of the truck had .2 blood alcohol content with the police picked him up. And the ice was actually from our neighbor who threw at the guy as he took off running.
Posted by Alex Hauck at 11:31 AM 1 comment:

Someone Call 911 our Deer have been Violated Again

If you read my blog from December 11, 2008 titled Woman, You Sound Old you would know that one morning my wife found our two lighted Christmas deer getting it on in the front yard. Well it has happened again, but at least this time the perpetrator(s) understood that the Buck goes on top. One also has to question why these criminal masterminds could not come up with something new instead of using humping deer again. Oh well at least this time they got the right sex on top.

These culprits of deer pornography strike really late because I was not feeling good this past night and went downstairs around 2:30 AM to get some water and the crime had not taken place yet. I guess next year Mary Ellen and I are going to have to stake the scene out in shifts with a super soaker filled with urine. At least this time I was able to remember to get a picture for your viewing enjoyment. 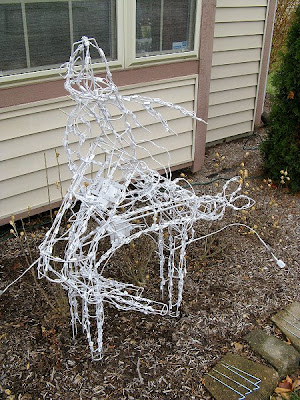 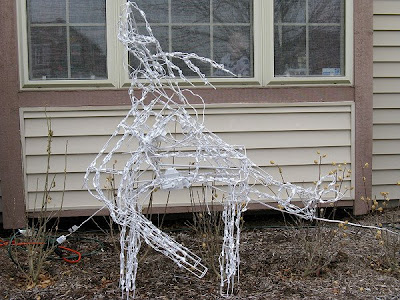 Posted by Alex Hauck at 5:39 PM No comments:

This past Saturday really made me feel old! I came stumbling down the stairs from the bedroom around 9:00 and Mary Ellen was already up waiting for me in the kitchen. As I start to walk by to get my breakfast she looks at me and says “Have you seen the deer?” Still somewhat asleep I responded no, why? “Well just go look for yourself” was her reply.

I guess right now I have to regress just a bit to give you a little background. A couple of weeks ago we went out and bought some outdoor Christmas lights along with a buck and doe deer that light up. Quite a few of our new neighbors really put on a Christmas light show, so Mary Ellen wanted at least a little something in the yard to fit in. I must say that I put these deer together without uttering one swear word and if you know me you know that was a feat in its self.

Now back to the story at hand. So I go into the living room and look out the window and what do I see a doe deer humping the buck! Personally, I thought it was funny on many levels and thinking to myself that if we were still living in New Palestine there would not have been this mix up with the sexes. My wife on the other had didn’t think it was very funny and starting talking about how it had to be "those teenagers", and they better not have broke it because we work hard for our money. After a minute or two of ranting the only thing I had to say was, “You really sound old right now”, which didn’t go over too well.

Needless to say I wish I had my wits about me to take a picture but I didn’t so I might just have to recreate it when we take them down unless “those teenagers” strike again. Also, in case you are wondering they still work.
Posted by Alex Hauck at 7:34 AM No comments: