Back in December of 2009 I had a blog entry titled War of 1812: The Battle of Mississinewa, well this week I finally made it up to the battlefield. It is located in Grant County, Indiana that is about seven miles north of Marion, Indiana. While not a big battlefield one can still gain a perspective of the land and how that affects the flow of battle.

It was a good time to travel up to the battlefield as the actual campaign took place this time a year with hostilities on December 17th and 18th. There were accounts of quite a bit of frost bite within the US ranks, and if it was anything like when I was there easy to see why. I cannot imagine how cold and miserable it must have been on the ten day march from Greenville, OH (Modern day Columbus) to the target area and back again. I was cold in modern winter wear on the field for around an hour.

Today most of the land surrounding the battlefield is farm land, but the glimpse you get at the battlefield would tell a different story. The terrain would have been small rolling hills, thick vegetation, and swampy. One of the reasons for launching this campaign in the winter was the thought that the marshy areas would be frozen over and easier to pass. Between the cold and the difficulty of the terrain I believe it must have favored the Indians even though the outcome did not.

By Civil War battlefield standards this site is not large at all. The battlefield has a couple of monuments one to the Indians and then one for the U.S. troops. There are also headstones for the fallen U.S. troops. In the parking lot there is a large wooden sign that gives a short summery of the campaign as well. Of course I recommend going and taking in actual landscape whenever possible as I feel it gives one a greater perspective of the stories and history of the action.

For more of a history on the campaign itself you can visit my old blog post. You can also visit Mississinewa 1812 for upcoming events an photos of past ones.

Posted by Alex Hauck at 7:25 PM No comments:

A Climb to the top of Mt. LeConte

I know this entry is a little late but I have been trying to find time to write it since I made the climb back on June 8th and 9th of this year. At present this adventure ranks as one of the best if not the best that I have had. I have done several hikes in the Smokey Mountains from the Chimney Tops to Spruce Falls but this by far was the most challenging and most gratifying of them all.

Mt. LeConte is the third highest mountain in the Smokey Mountain Range, but if you measure from its base to summit it is the highest mountain in the eastern United States at 5301 feet(1). On this hike we chose to go up via the Rainbow Falls trial and after spending the night in the back country shelter we would head back down the Bullhead trail. This worked out perfectly as the two together forms a loop trail and we could end up back at the car.

When we started out on the Rainbow Falls trail the sun was out and the temperature was perfect. The trail is steep the average elevation gain for the Rainbow trail is 579 feet per mile(1). A lot of people were out on the trial but it did not feel overly crowed at this point because it was fairly wide. For the most part a creek ran alongside the trail all the way up to the falls. Rainbow Falls is one of the tallest in the park but the volume of water is not too strong. It is a misty falls that creates almost a silk effect as the water rolls off.

Once past the falls the trail remains fairly steep, but becomes narrower and the brush starts to close in. In some spots one can even feel a little claustrophobic as the brush really closes in around you. This is also where people start to thin out and you feel more secluded. During our ascent from here we only ran into one other person before we reached the LeConte Inn. By this time my knee was on fire and I could already since how sore I was going to be in the morning.

We made our way to the back country shelter that is really nothing more than a wood lean two where they have and upper and lower row wood platforms to lay your sleeping bag on. It is pretty amazing how the scenery changes as you go up. At the top of Mt. LeConte it is very much old forest with beautiful fir trees and spruces. We were able to get some pictures at one of the few clearings and then it started to rain. Just made it to the shelter before it really started coming down, and it didn't stop all night.


The next morning it was still raining fortunately it slowed up enough that it was possible to get our picture at the summit of the mountain before packing up and heading out. After filling up with water at the lodge we heading back down the mountain via the Bullhead Trail. This was the first time on a trail in the Smokey Mountain National Park that I didn’t see a single sole. It was Greg and I the whole way down.

There was a continuous rain for half of the decent. It rained so much that at some points the trail seemed like a small creek with water coming up over my boots. Like the last trail it was pretty steep with an average elevation gain of 555 feet per mile(1) which is still hard even though you are going down. One of the highlights on this trail is the long, almost tunnel like, run of rhododendron along the path. Another is two huge rock overhangs that would provide a nice shelter if some nasty weather rolled in. We were also lucking enough to see a small deer on the trail that let us get so close we could almost touch it before it ran off.

The scenery on this hike is amazing and the accomplishment of the challenge gratifying. Though this hike was a difficult one it has been one of my best adventures. I would do it again in a heartbeat and recommend it to anyone. I do have to say you will need to be in fairly good shape due to the length and elevation of the trip.

(1) Hiking in the Smokies
Posted by Alex Hauck at 4:50 PM No comments:

Saturday March 2nd was a cloudy cold day, but earlier in the week I had already made up my mind that I was taking Liam to Turkey Run State Park. I have been suffering from cabin fever and felt Liam needed to get away from the television and his video games. I had not been to this park other than to canoe through it back in college. My good friend Greg decided to join us as well. 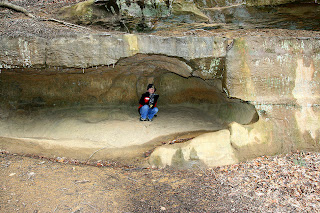 So I loaded my camera along with Liam into the Jeep, picked up Greg and head out. It still had not warmed up with the temperature hanging around 33 degrees when we pulled into the park around 12:30. We suited up crossed the suspension bridge then headed east on trail three. After passing the Ice Box and taking a few pictures of Liam inside some rock structures we came to the ladders. Liam was really excited the whole week about the prospect of climbing up them and they did not disappoint. When you get to the ladders it is basically a dead end of rock and the only way out without back tracking is to climb up the ladders and walk the rock ledges. Plus today we had a little waterfall as a backdrop to this feature that just added to the scenery. 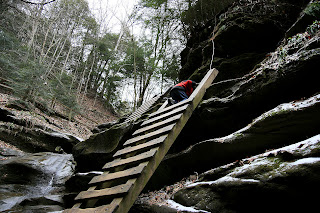 After the ladders the terrain opened up and became wooden for a while but before long we were once again surrounded by rock walls. We followed a small brook that had become part of the trail and it led us to the Punch Bowl. The Punch Bowl is a little canyon that comes to a dead end with a small waterfall that collects in a little pool. We got a nice group picture here before heading on downstream. 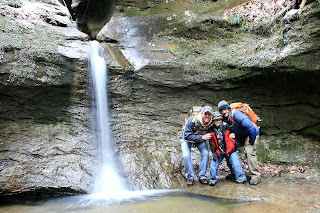 The trail followed the brook on downstream with rock walls to either side. The trail actually became part of the rock wall, but due to ice on the ledges we stuck pretty much to the brook. At one point the brook had cut a thin deep trench that had fast moving water running through it and we had to do the old shuffle with legs and hands out on the rock walls to get through. Once through there were a couple small waterfalls and then the landscape opened up to a wide, high canyon. At this point in the hike it started to snow and you got one of those rare picture perfect nature scenes that will be remembered for time to come. 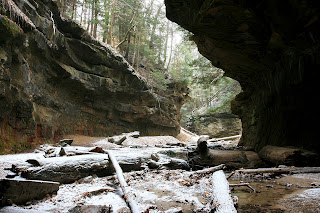 In the end this was one of those perfect days where everything fell into place. The weather never got too cold other than our hands chilled a few times, the snow made for an exceptionally scenic view, and Liam had a good time not stuck in front of a TV screen. I would highly recommend this park to anybody, but it is fairly rugged with a lot of stairs and climbing that may make it difficult for those who cannot get around too well. The scenery and features of this park make it absolutely breathtaking with it being one of the best hikes in Indiana.
Posted by Alex Hauck at 5:41 PM No comments: