On Friday November 16, 2012 I took a little jaunt up north to the Tippecanoe Battlefield.  I have been trying to get there for some time and finally just took a day off and did it.  It was a nice blue crisp day and even though most of the leaves have fallen from their trees it was still a very scenic out.  I started in the Tippecanoe Battlefield Museum that has a pretty nice collection of information on the battle along with the history of the field itself.  They also house a very extensive collection of old fire arms. 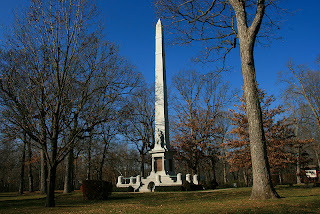 From there I went and walked the actual battleground itself before snapping a few pictures.  There is a large monument along with some headstones of participants who died.  The field itself is not very big, like most of its time.  It is only the size of a couple football fields put together, but will definitely give you a greater sense of the battle. 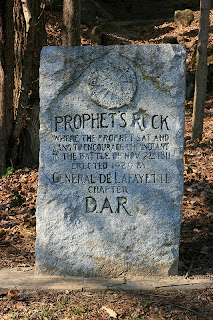 From the battlefield you can hike out to Prophet’s rock, which is the outcropping where the Prophet rallied his warriors the night before the battle.  While it is not a far hike to Prophet’s Rock once you get to the main trail it is very poorly marked.  There is not a sign that actually points you in the direction of Prophet’s Rock, just to Prophet’s Rock Parking.  You will want to follow that sign.

After my time at the battlefield I went into Lafayette and had lunch at the Lafayette Brewing Company.  The Oatmeal Stout is fantastic as was the Tippecanoe Ale.  I highly recommend swinging through there if you are in the area.

At the end of this blog I have some links listed, also for those who are interested a short history of the battle is below.

The battle of Tippecanoe was precursor to the War of 1812 and was fought over land rights between the United States and Indian Territories.  Two Indian brothers Tecumseh and Tenskwatawa (known as the Prophet) were forming a large Indian Collation to fight the westward expansion of the United States.  This concerned William Henry Harrison who at the time was the Governor of the new Indiana Territory.  Tecumseh was upset with the recently signed Treaty of Fort Wayne that gave up large parts of land to the United States in the northwestern part of the Indiana Territory.

Harrison and Tecumseh held some talks over the disputed territory but eventually they broke down.  At their last meeting Tecumseh actually told Harrison that he was going to go recruiting and to do nothing in the disputed lands until he got back.  Of course Harrison saw this as an advantage and decided to launch his campaign in Tecumseh absence.  With a force of around 1,100 men Harrison left Vincennes in late September, 1811 and moved north.

Harrison and his army arrived at the Indiana encampment known as Prophet’s Town were the Tippecanoe and Wabash rivers met on November 6, 1811.  A delegation from Prophet’s Town came out to great Harrison and to arrange a meeting the next morning.  The army set up camp at what is now called Burnett Creek and put guards and fires along the perimeter.  The Prophet decided to attack the American before sunrise and gave a rousing speech in a rock outcropping now known as Prophet’s Rock.  He told the Indian warriors that with his magic the American’s bullets would pass right through them and not cause any harm. Just before sunrise on November 7, 1811 the Indians started their attack.  The American force was able to repel the attack, and as the Indian Braves realized that the Prophet’s magic didn’t work.  The Indians became demoralized and started to retreat at day break.  A final charge by the Americans broke what was left of the attack and then spent the rest of the day consolidating and reorganizing.  On November 8, 1811 Harrison’s mounted troops rode into an empty Prophet’s Town where they found evidence of British involvement.  They proceeded to burn the town to the ground and then set back off to Vincennes.

The Prophet lost more than just the battle he lost a lot of respect for poor planning and his failed magic.  Tecumseh was not able to keep the coalition together after the loss but joined forces with the British in the War of 1812 with what warriors he had left.  Harrison’s mission was received well in Washington which further bolstered his political capital heading into the War of 1812.

Most of the information I used for came from; To Compel with Armed Force: A Staff Ride handbook for the Battle of Tippecanoe and I have the link provided below.